I was getting a drink recently with a friend who reminded me that my really special gift is my ability to find levity and celebrate absurdity beyond heaviness, beyond intellectualism. Ain’t that the truth. It’s been an unforeseen heavy year -- one in which I have pondered this balance between heaviness and levity, condemnation and affirmation, restraint and action. I continue to grapple with this but see through the fog a clarity around the bend. Below is a year filled with writing, art, activism, public speaking, love, yoga, travel, churning.

Black Lives STILL Matter. And they always did. Probably the most prevalent theme of 2014 lingered into 2015, and now into the coming year. The equal treatment of our black brothers and sisters is still something we must fight for. Though this is unfortunate, I am happy to have been involved and to continue to be involved in the resistance to ignorance and fear, and the assertion of equality and kindness. This concern led to the continuation of my #ChalkedUnarmed project, including an Artists Support Grant from The Regional Arts Commission which allowed me to purchase a camera to document this work, a presentation at the Open Engagement conference in Pittsburgh, and a Youth Chalk Out on the 1-year anniversary of the death of Michael Brown. My commitment to the BLM movement also culminated in the purchase of our Artivist collective's Mirrored Casket by the Smithsonian Museum of African American History and Culture. The Artivists have been planning to use part of the funds from this project, in addition to a large national grant we are waiting to hear back from (fingers crossed) to fund a new initiative, Growing Griot, a partnership with the Griot Museum to create a creative entrepreneurship program for recently incarcerated adults re-entering society. I participated in two photography projects featuring activists from movement: Faces of the Movement, and the illustrious Sara Swaty's Fragments of Ferguson project.

Universality. Near the beginning of this year, as I pondered the universality of the Black Lives Matter movement, I completed writing a piece for the Public Art Review called "Revolutionary Art in the Digital Realm", which compared the September 2015 killings of students in Iguala, Mexico, with the killing of Michael Brown. I have always been and continue to be curious about expanding my expertise globally, and exploring these links between unique phenomena and their universal, human applications or causes. This piece was my re-entry into that space, and specifically called upon my Spanish language skills to interview and translate which has also been welcomed in 2015. I hope to continue to grow this focus and these skills in 2016. Similarly, for The Mantle, I wrote "Ferguson and the Art of Protest", which also connected Ferguson to Iguala, and delved deeper in the creative work coming out of the protest movement.

Refugee crisis and artistic response. Obviously, an eye on global strife has led me to consider deeply the ways in which I can effect some positive help with the refugee crisis in the Middle East, Europe, and even here at home. I don't know my appropriate response yet, but I'm steeping in learning, as well as digging into my own Islamic past to learn how my very personal relationship to the crisis generates something deeply meaningful and important.

Got hitched. Heavy?! Kinda. I mean I planned and executed a wedding in, like, 4 months? Shit went down, etc., but it was a fantastic party in the end. Surprisingly featured in ALIVE and Gazelle Magazine, with fun photos here.

Building as Body. This project, which debuted in October 2015, I co-created with Michael Allen of Preservation Research Office. Michael and I both took part in a workshop where he spoke about the complex architectural history of the region, and I led a meditation immediately after. The lightbulb went off and from it was born Building as Body, a chakra-based yoga practiced in abandoned sites throughout St. Louis, exploring the connection between buildings as bodies and bodies as architectural forms, both sculpted by history, culture and nature. The project will recommence in Spring 2016.

Collaborating with Chris Kallmyer, Commonfield Clay, a group of about 10 artists joined Chris in this experimental sound workshop and performance at The Pulitzer Arts Foundation. Chris led a listening workshop, built musical chimes out of Mississippi clay, and a group of about 10 artists (including myself) played these chimes in a performance at the gallery in September. Together with Chris, I crafted a meditation to segue the team into deeper listening practice during our weekend workshop. This experience was a great lesson in which I connected back with the deep learning power of listening, which I continued to consider throughout the end of 2015. This experience is what cascaded into Building as Body (above).

Continuing this theme of body and contemplation, I had the privilege integrating my yoga and meditation teaching into art institutions this year. Above, I mentioned leading a meditation practice as part of Chris Kallmyer's Commonfield Clay project at the Pulitzer Arts Foundation. With the St. Louis Art Museum, I led a year-long yoga program for the staff (in an absolutely gorgeous contemporary German art gallery), and in May, I led a meditation practice during SLAM Underground for over 400 people, also in the galleries. I, too, led a yoga mudra workshop at the Contemporary Art Museum as part of Pedro Reyes' Sanitorium.

STL Improv Anywhere, the definition of levity, kicked the year off with our 5th annual No Pants Metrolink Ride, celebrated Valentines Day handing out handmade V-Day cards to strangers, frollicing up and down S. Grand, and hosted its 4th International Pillow Fight Day in April, which was and is always utterly joyous. This year we probably had the widest variety of participants ever. The inclusiveness of this playful event has always been a motivation for putting this on year after year. The performance troupe was also commissioned by CAM to lead a Halloween activity for youth at the museum's holiday party. We created a interactive skits that invited the kids to take part.

I was honored to have participated in a playful and inquisitive site-specific theater piece called GRASSHOPPERS!, part of the Pockets of Wonder project dreamt up and directed by the resplendent Em Piro (Founding Director of St. Lou Fringe) as part of the Artica festival.

Speaking Engagements were and are always an honor, and I participated in a few this year. Above, I mentioned sharing the #ChalkedUnarmed project at Open Engagement in Pittsburgh. I was also able to spend time in PGH workshopping with Rick Lowe, and experiencing Jon Rubin's radical Conflict Kitchen. I also spoke on panels about Arts Marketing for St. Lou Fringe as well as College Bound. For Critical Mass I discussed Art and Place, and for Midwest Artist Project Services I sat on a panel discussing Alternative Organization.

Travel took me to Galena, IL (charming!), Chicago, Pittsburgh (where I totally fell in love), Seattle, San Francisco, a roadtrip along the PCH in NorCal, and Portland.

I was appointed to the Placemaking Leadership Council for the Project for Public Spaces.

And then -- of course there's my day job at Elasticity, where my project won an award for Best Overall Arts Marketing Campaign in July.

Life's so different than it was this time last year, but I welcome the change. Here's to doing more impactful work, more exploration of intentional levity, increased production over consumption, a growing writing practice, international travel and learning, collaboration, and maybe...grad school ;)

Tonight, Andy & I throw a NYE Bash. Next weekend we fly to Costa Rica to witness the wedding of some of our dearest friends. Here goes nothin'.

To an experimental year ahead.

For the love of the unknown,

10 Things I Learned From Giving a TEDx Talk 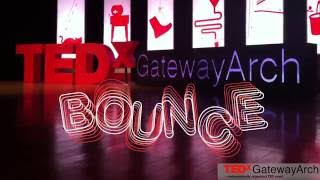 10 Things I Learned From Giving a TEDx Talk

What it means to quit a job